The chapels of the nave and transept

Eight lateral chapels line the nave to the east and to west.

They were transformed between 1823 and 1879 under the direction of architects Tony Desjardins and Sainte-Marie Perrin; in each case the window was closed, the altar moved against the exterior wall, and the decoration redone with stucco and gold based on the model created for the chapel of the Virgin.

Although they date from the 19th century, these chapels have reached us in very poor condition and notwithstanding some very conventional plastering, they present considerable interest. They house some very high quality sculptures such as the statues of Saint-Bruno, the lying Christ, the Virgin and paintings such as the Baptism of Christ, the pacified storm, the wedding of the Virgin, the entombment. 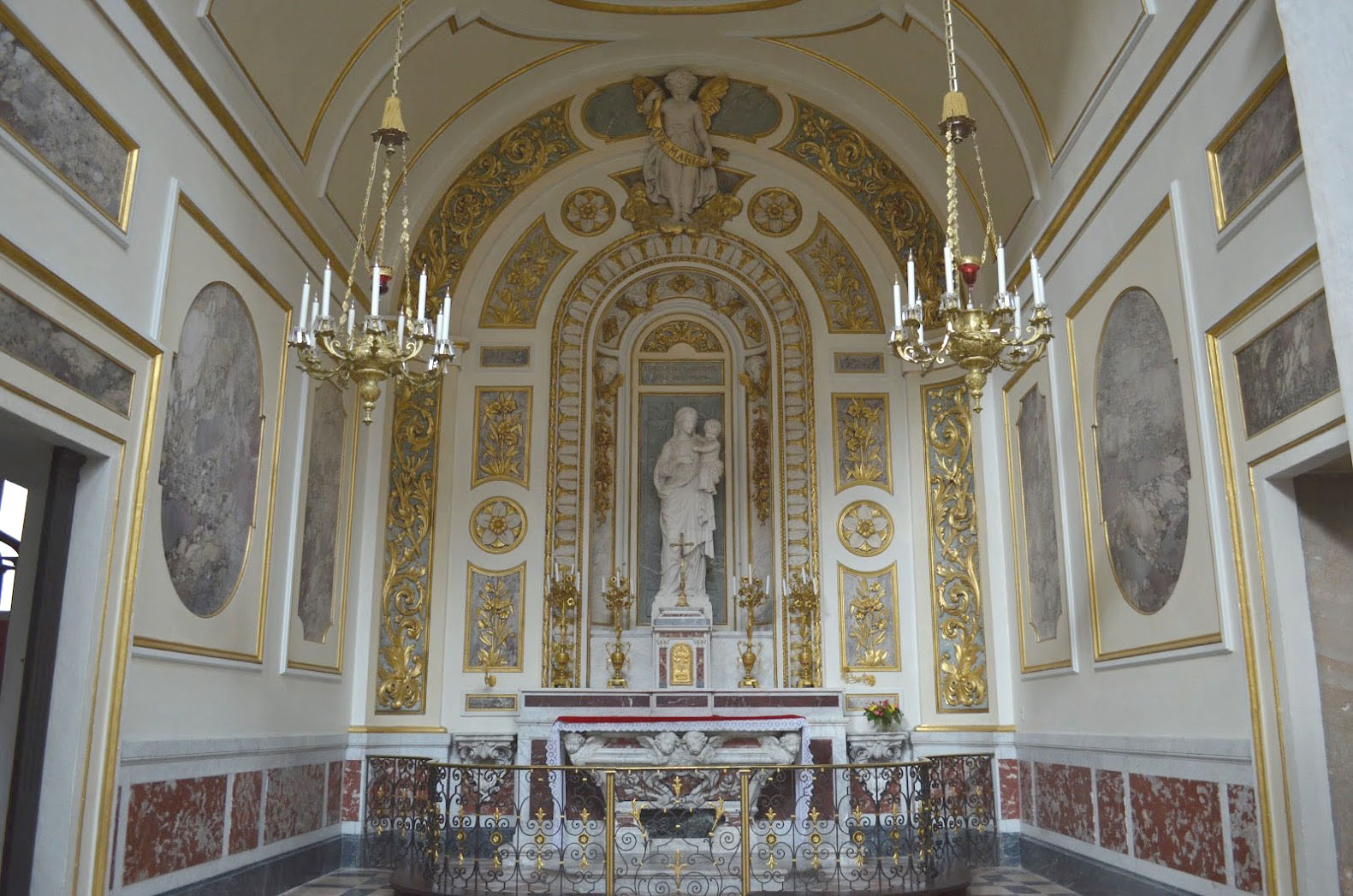 Chapel of the Virgin 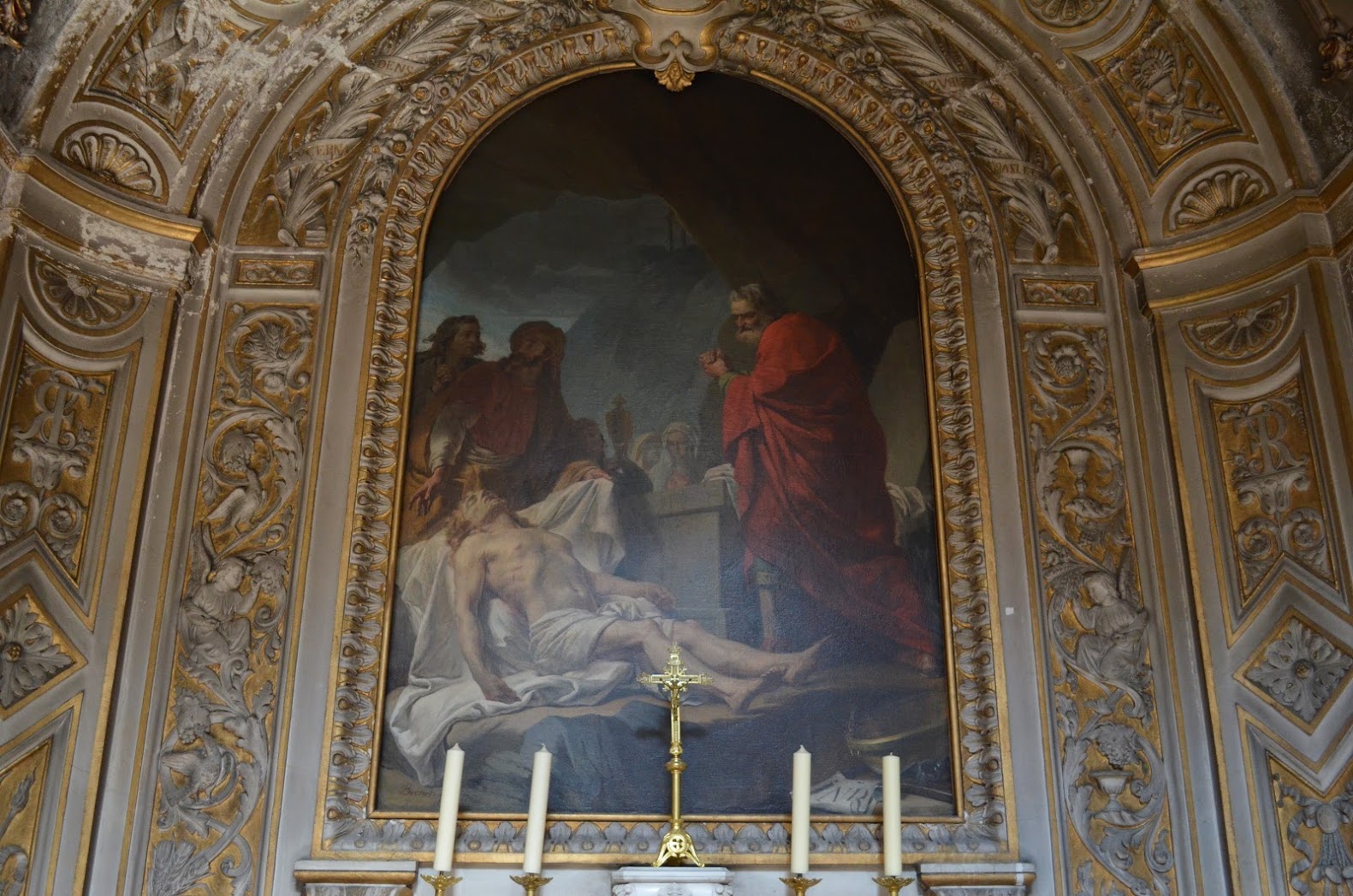 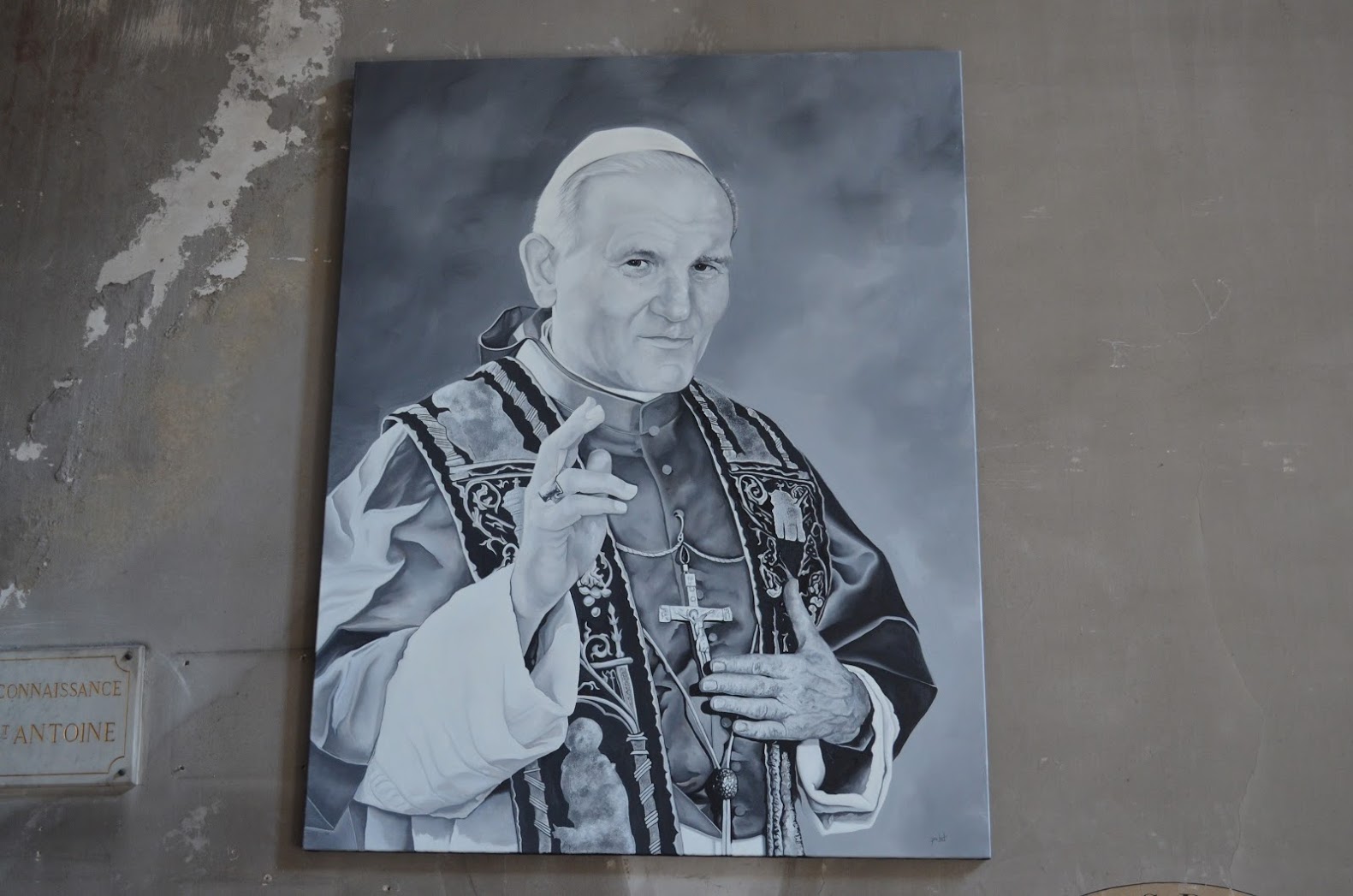 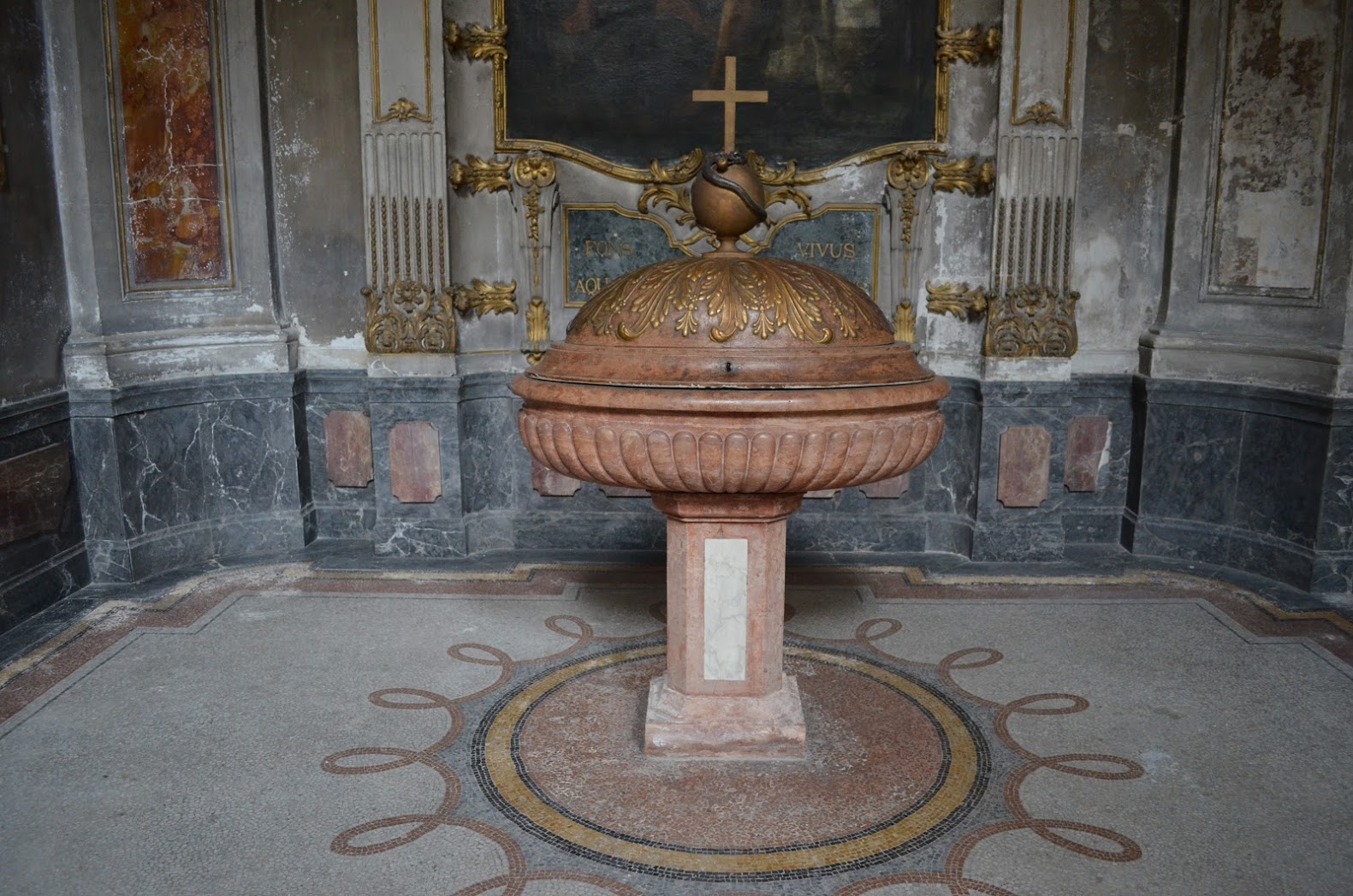 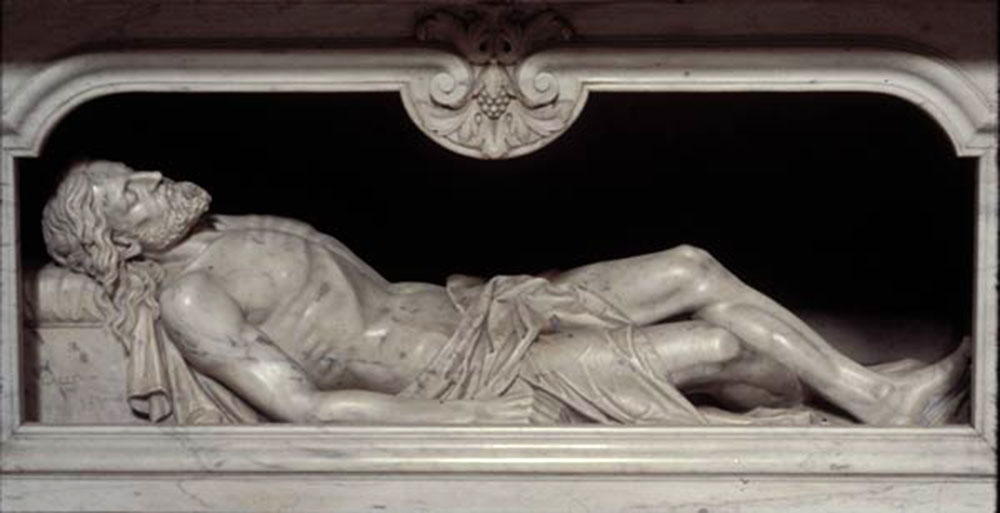 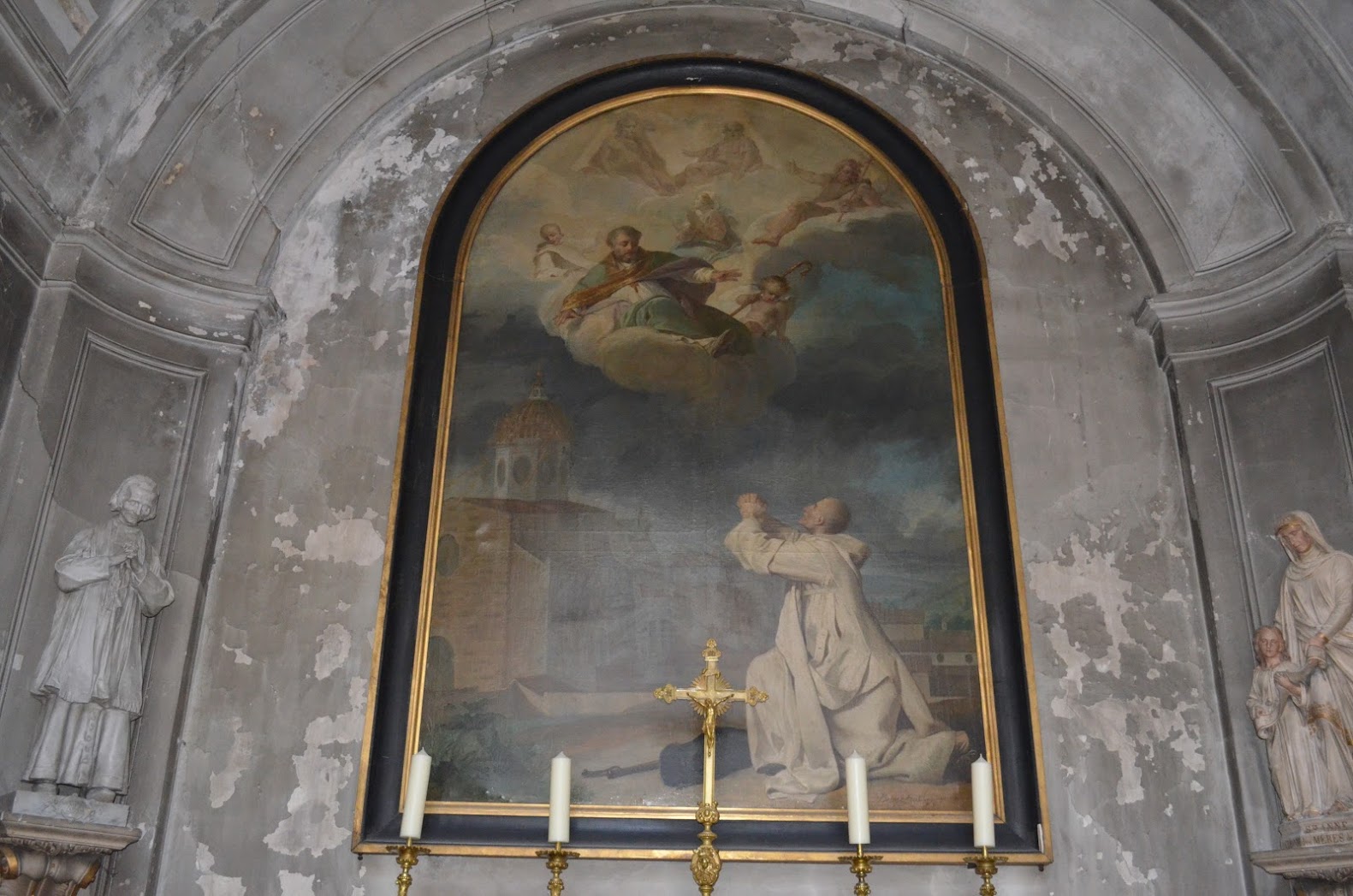 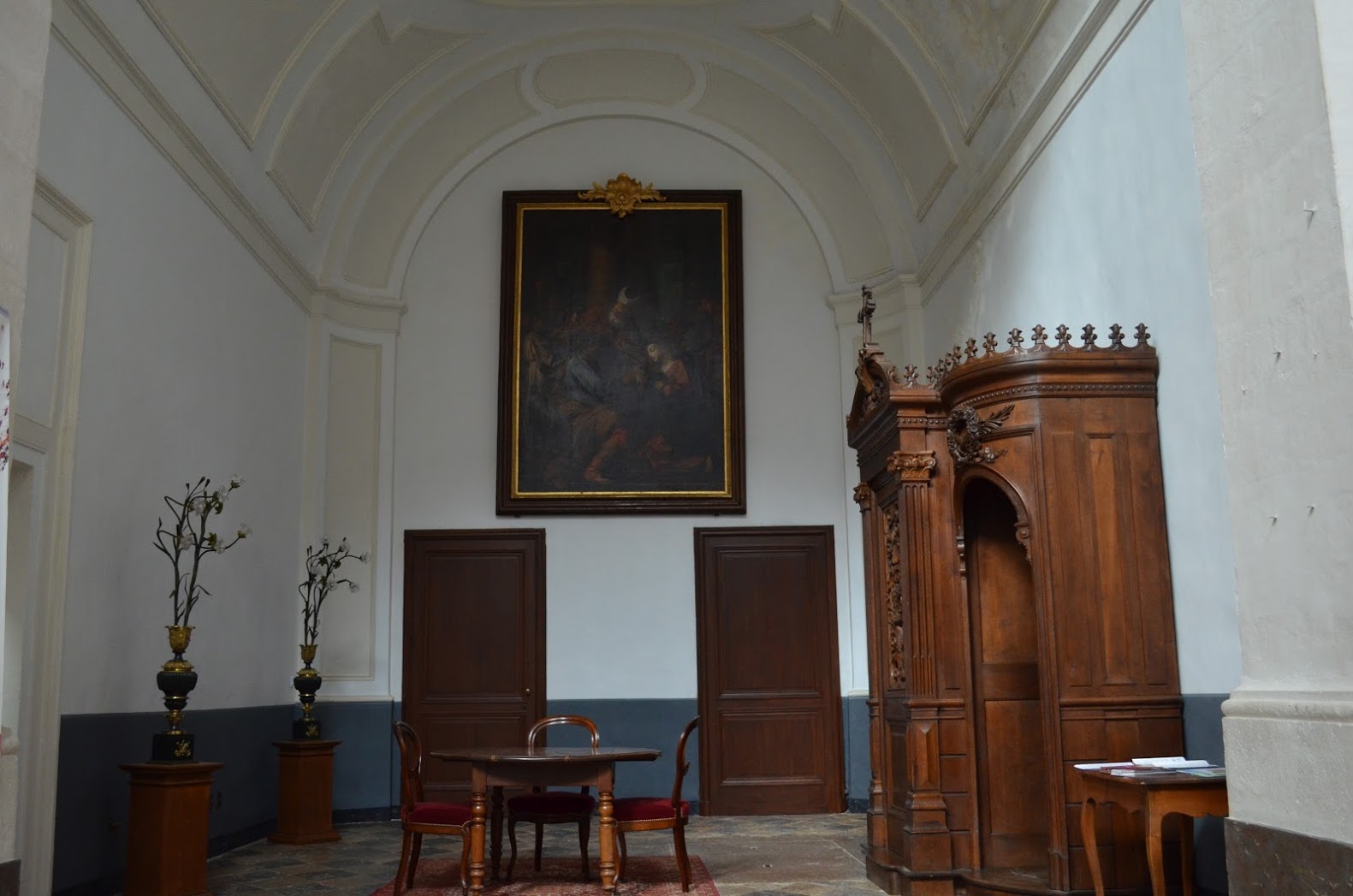 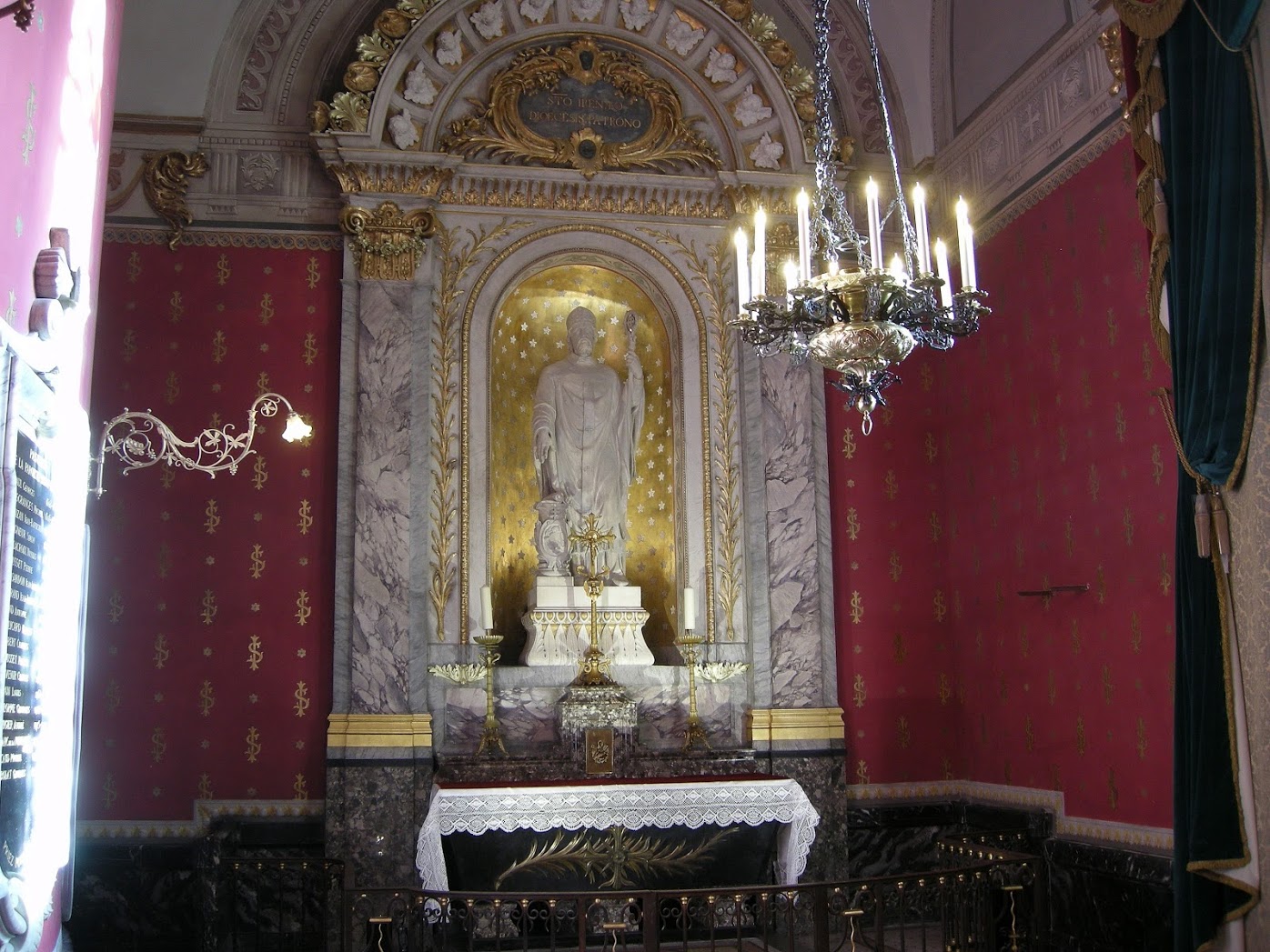 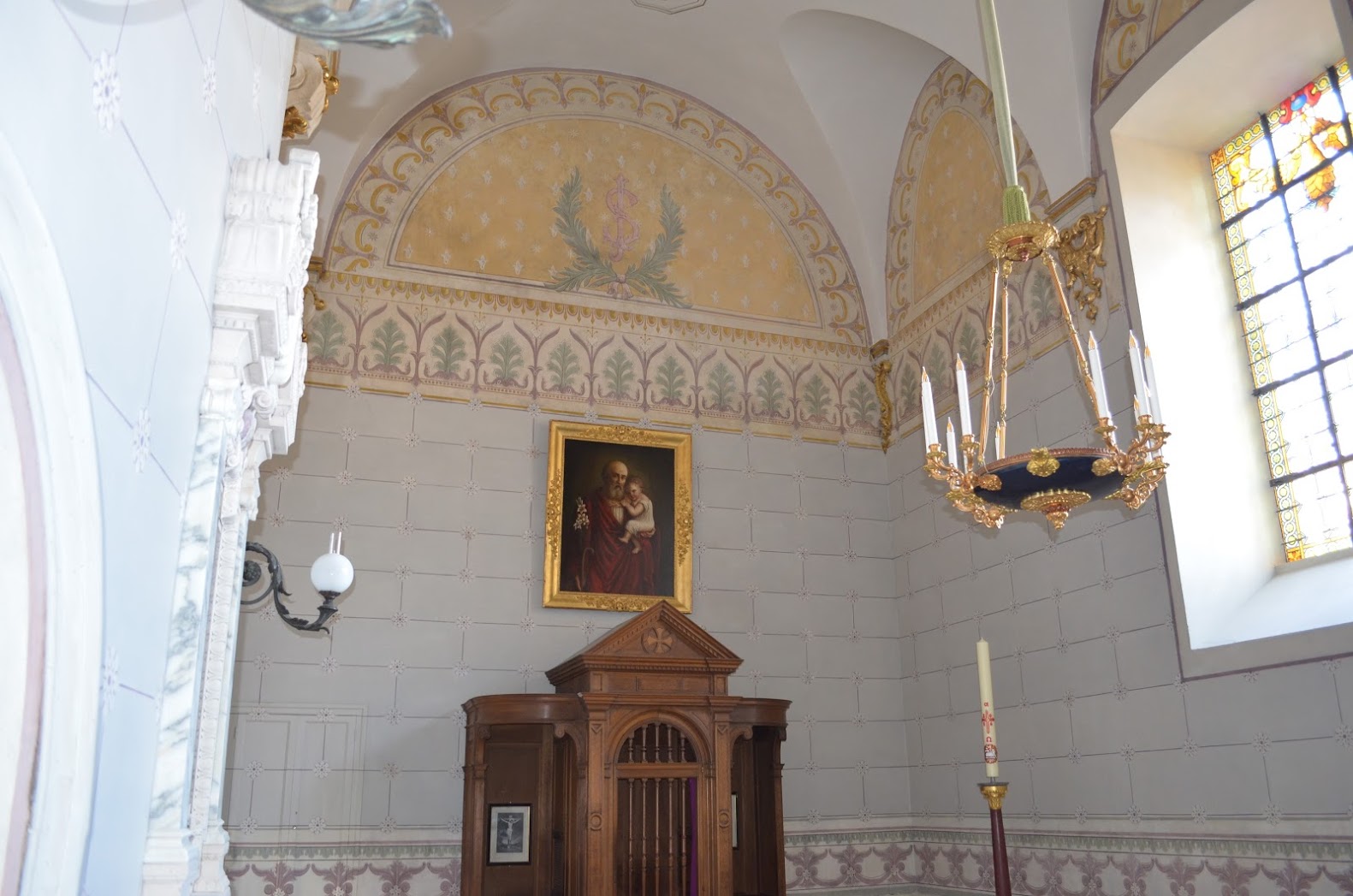 Chapel of the Virgin

It is the first of the side chapels which were restored in the 19th century by Tony Desjardins around a decor of white and gold stucco which would serve as a model for the layout of the adjoining chapels.

The Genoa marble altar dates from 1735.

The marble altar, in the shape of a tomb, dates from the 18th century.

The patinated stuccoed wooden statue of "Saint Bruno in prayer" dates from the 17th  century; it is attributed to Jacques Sarrazin. Its  monumentality makes it a very different work from the Saint Bruno statue installed in the transept.

« The entombment of Christ », a painting by Nicolas-Guy Brenet dated 1763, is a characteristic example of the painter’s very legible, clear and monumental style.

Brenet uses the face of the Christ as a pretext for serious anatomic study, without any doubt executed according to a model. The deathly whiteness of the corpse is in glaring contrast with Joseph’s great coat of bright powerful red .

The chapel takes its name from the central painting, The Ascension of Saint Peter, by an anonymous 19th century painter. The painting’s interest is mainly documentary: it shows the Croix-Rousse slopes before their urbanization, dominated by the dome of Saint-Bruno’s church.

The Saint, who holds the keys in his hand, is a copy of the same character appearing in the lower register of the Ascension by Perugino (circa1448 – 1523) painted for the Church of San Pietro of Perugia and visible since 1811 in the Museum of Fine Arts in Lyon.

Since April 3, 2016, a painting representing Saint-Jean-Paul II has been installed in the Saint-Pierre chapel. It is the work of David Pelat, a contemporary painter from the Rhône-Alpes region, specializing in monochrome tones.

Chapel of the Baptismal Fonts

The chapel was completely transformed at the end of the 19th century when it was chosen to house the Hallé painting which used to hang at the very back of the choir.

On both sides, large panels imitating marble, marked with the acronym of Jesus Christ IHS, are in harmony with the baptismal font and the balustrade.

The painting entitled “Baptism of Christ” by Noël Hallé was painted around 1746. The very elongated shapes, the very similar faces of Christ and John the Baptist, the brisk strokes and the very light colours are characteristic of this  painter’s quick execution style.

Chapel of the Sacred Heart

Two remarkable elements of this chapel are organized around the Passion and Death of Christ:

- the reclining figure at the bottom of the altar “Christ lying on a shroud”, sculpted by Rodolphe Galli in 1862. The delicacy of the sculpture gives the dead Christ an impression of serenity. (photo Pierre Clavel, CRDP Lyon)

- the painting « The apparition of the Sacred Heart to Marguerite-Marie Alacoque » by Benoit-Antoine Sublet during the second half of the 19th century is typical of the renewal of Catholic painting in this period. As she prays before the altar, Sainte Marguerite-Marie of Paray-le-Monial, beatified in 1864 and canonized in 1920, sees the Christ with his five wounds, asking her to develop devotion to his heart “which has so dearly loved all mankind”.

Notice as well the frame in gilded and painted plaster recalling the instruments of the Passion and the serpent, symbol of Evil (bottom left) defeated by Christ’s sacrifice (represented at the top by the “Sacred Heart”). 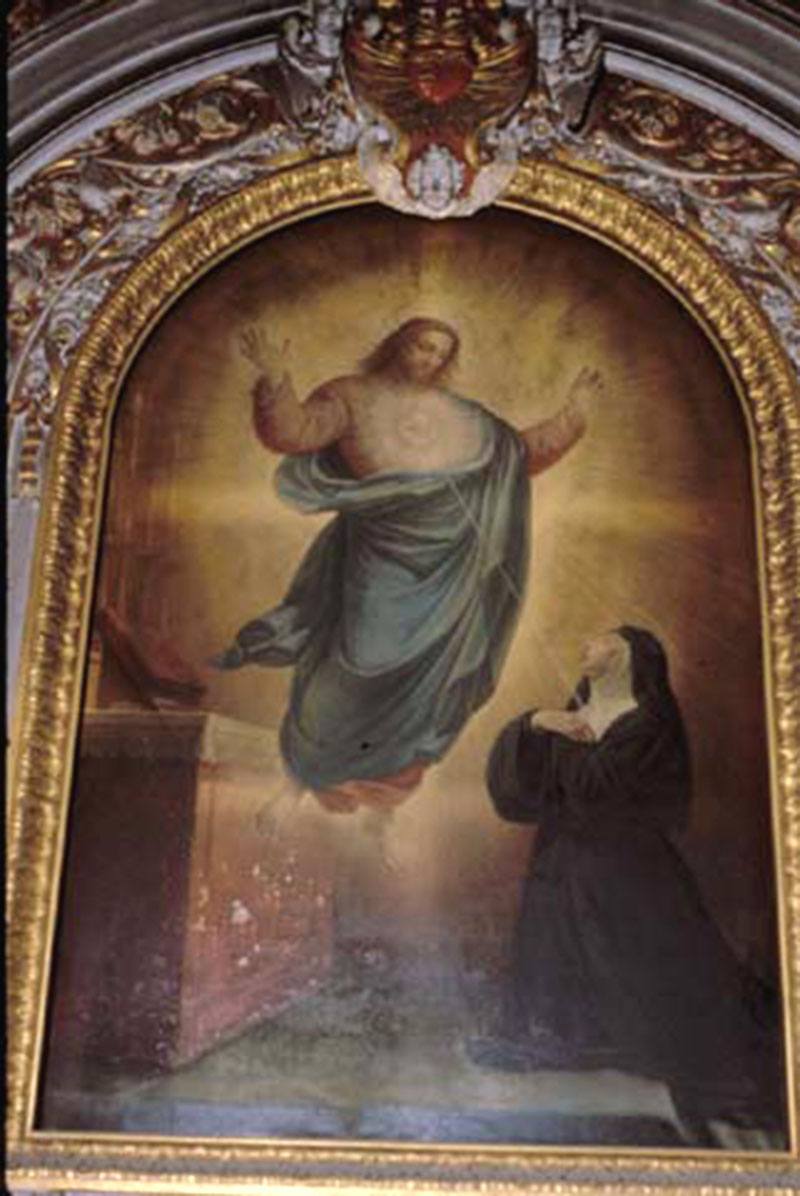 The name of the Chapel dates from 1845. A sculptured plaque on the front of the altar shows the instruments of the martyrdom of the Saint.

The painting entitled “The pacified storm” or “ The miracle of the dome” was painted by Nicolas-Guy Brenet in 1760 during a stay in Lyon, returning from Rome.

A Carthusian monk implores Saint Anthelme: after a storm which had shattered the wooden frame of the dome, the beams are miraculously reset in place. At the top, the Trinity and, from right to left, Saint Bruno, the Virgin, Saint John the Baptist.

(formerly chapel of the Chairs)

This chapel, located to the right of the entrance, was formerly dedicated to the storage of chairs used in the nave.

Its artistic interest is the painting “The wedding of the Virgin” by Michel-Ange Challe, painted in 1752.

The Virgin and Joseph who holds the flowered stick are kneeling in the foreground, united in wedlock by the high priest (see the three united hands in the centre). In the background, notice the temple.

One appreciates the compact and dynamic qualities of the composition, and the strong focus on the characters.

A restoration carried out in 2015 has revived the bright colors and the background scenery that was previously invisible.

This chapel decorated in 1880 is named after the statue on display, the work of Fabisch’s son. Saint Irenaeus, bishop of Lyon in the 3rd century, is the patron of the diocese.

It also houses a painting of the “Adoration of the three wise men ” dated 1848 by Chloé du Pasquier, after Rubens. First shown at the Salon de Lyon in 1848, it is a faithful, slightly smaller, copy of Rubens’ masterpiece painted around 1618 and kept in the Musée des Beaux-Arts (Museum of Fine Arts) in Lyon.

The chapel of the right transept, decorated in the antique style, is dedicated to "Saint Joseph, patron of the Church" a rare description. The statue of Fabisch’s son dates from 1880.  On the north wall hangs a painting by Louise Brondel "Saint Joseph with the Child".