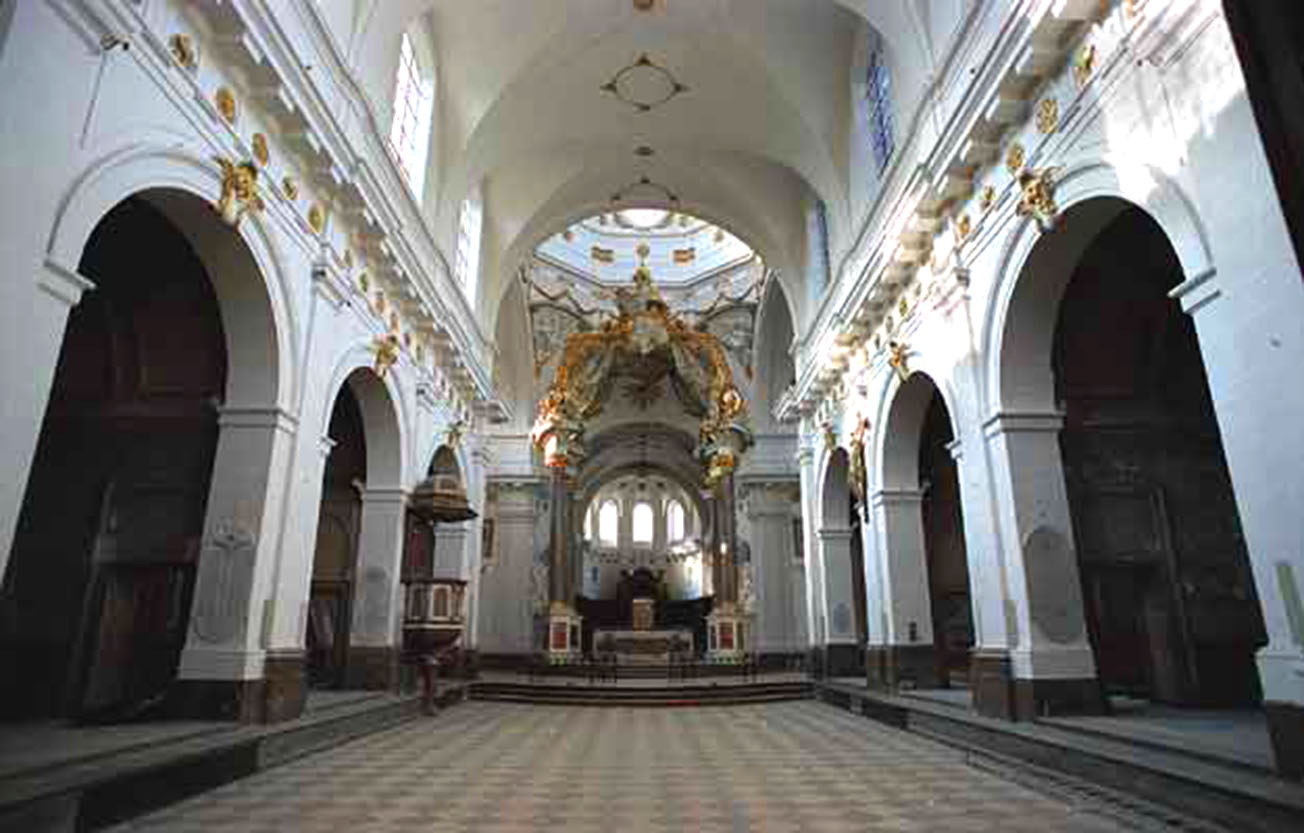 It corresponds to the work campaign carried out by the architect Delamonce in the 18th century.
It includes four spans lit by eight rectangular windows on the sides and another oval window above the entrance.
The vault in penetration, in the form of a basket handle, rests on the separation pillars between the arches which open onto the side chapels, four on either side. The latter should not be overlooked as they are home to statues or paintings, generally beautifully made.
The upper part does not have a balcony.
A strong cornice with plaster denticles separates the lower part of the vault. A frieze alternates in the metopes the rose and the dove, symbol of the Holy Spirit. 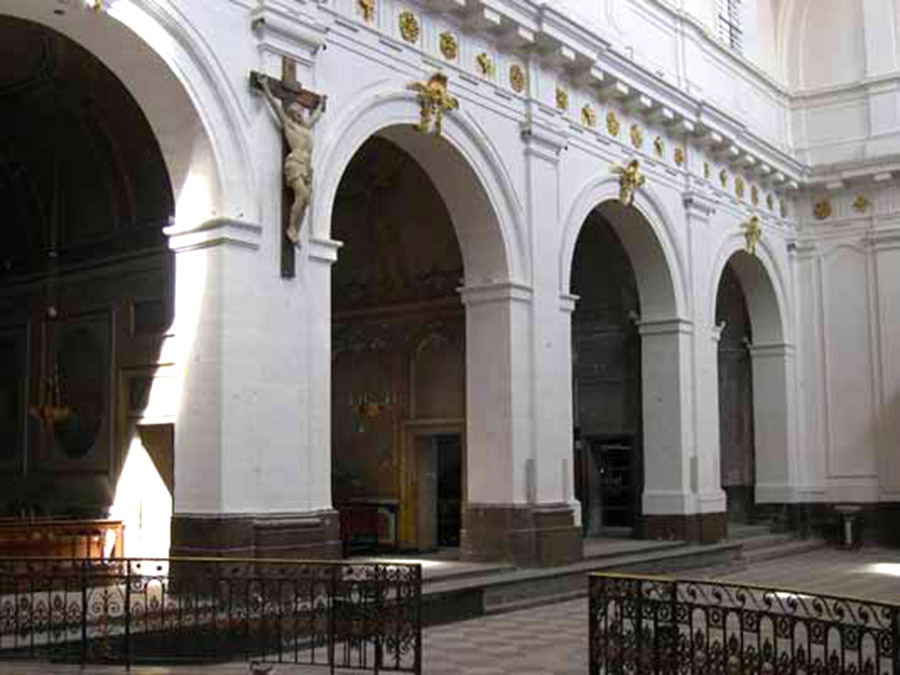 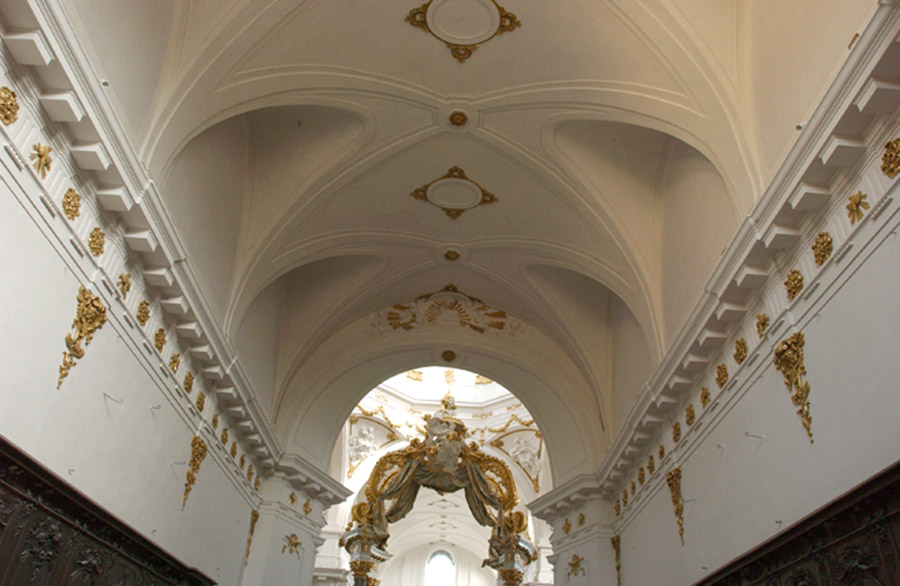 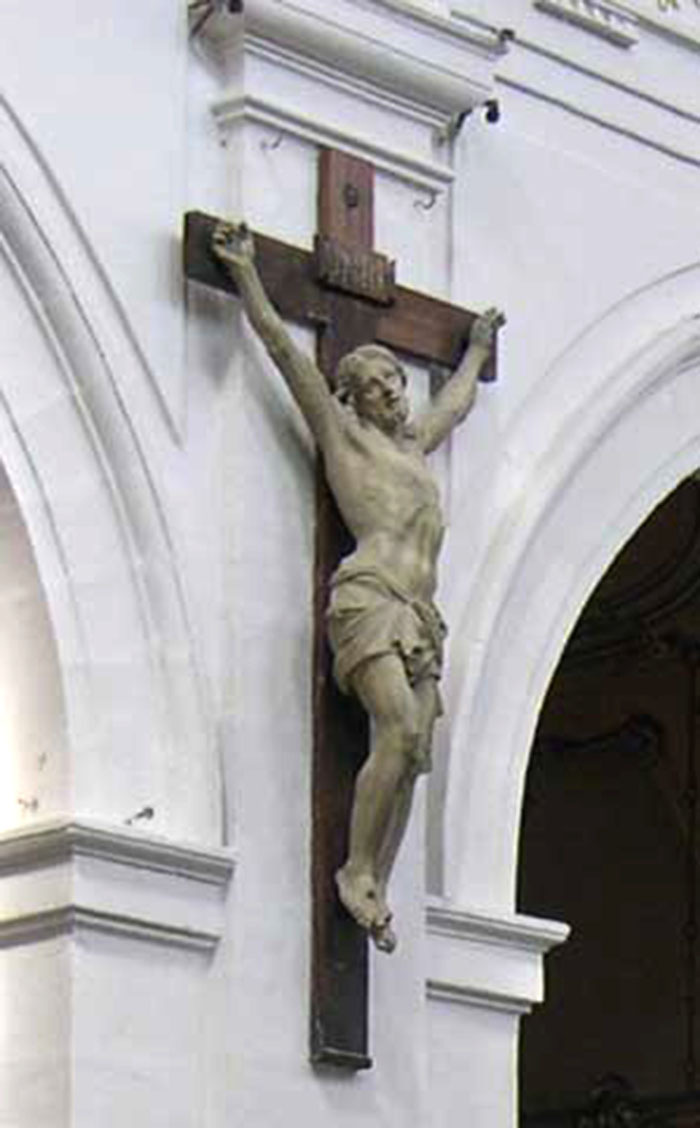 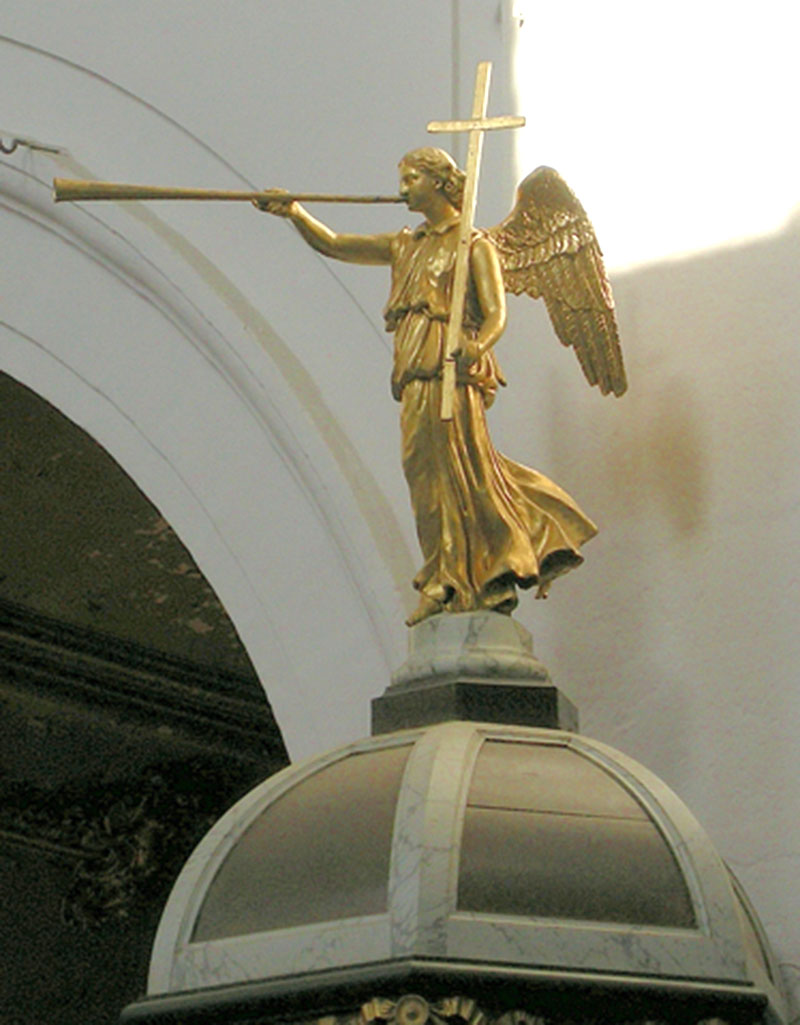 The nave, west side

The 17th century crucifix and the Way of the Cross were added in the 19th century.

Vault of the nave

The 2003-2005 works campaign made it possible to highlight the delicacy of the moldings which constitute the main decor.

Frieze of the nave

The plaster indented cornice separates the lower part of the vault. Below a frieze alternates in its metopes the dove, symbol of the Holy Spirit and the rose, a decorative motif popular in the 18th century.

Dove and rose on the frieze, Photo Anne-Lise Goujon

Chapels of the nave

Eight side chapels line the nave to the east and to the west.

They were transformed between 1823 and 1879 under the direction of architects Tony Desjardins and Sainte-Marie Perrin; in each case the window was closed, the altar moved against the exterior wall, and the decoration redone with stucco and gold based on the model created for the chapel of the Virgin.

Although these chapels date from the 19th century, have reached us in very poor condition and notwithstanding some very conventional plastering, they present considerable interest. They house some very high quality sculptures such as the statues of Saint-Bruno, the lying Christ, the Virgin and paintings such as the Baptism of Christ, the pacified storm, the wedding of the Virgin, the entombment.

Three of these chapels were restored in 2015-2016, at the same time as the two chapels of the transept.

Crucifix of the nave

The chair, the angel playing the trumpet

The chair is dated 1815.
The marble base with simple coloured panels is in the taste of the 17th century.
It is covered by a hemispherical shade with an angel playing the trumpet.

Longitudinal section of the church dated 1736

This is the plan of the second building campaign of the church. The completion of the church was entirely faithful to that plan.
Ferdinand Delamonce enhanced the monks’ choir, built a large nave for the faithful, provided a wide transept surmounted by a high drum crowned with a dome which rises to 50 meters in height.
Note the shift in height of the vaults between the choir and the nave, compensated  by Munet’s arch (named after the assistant architect to Delamonce) between the choir and transept.
The small door at the back of the choir opens onto the small cloister through which one accesses the chapterhouse meeting room and the refectory.