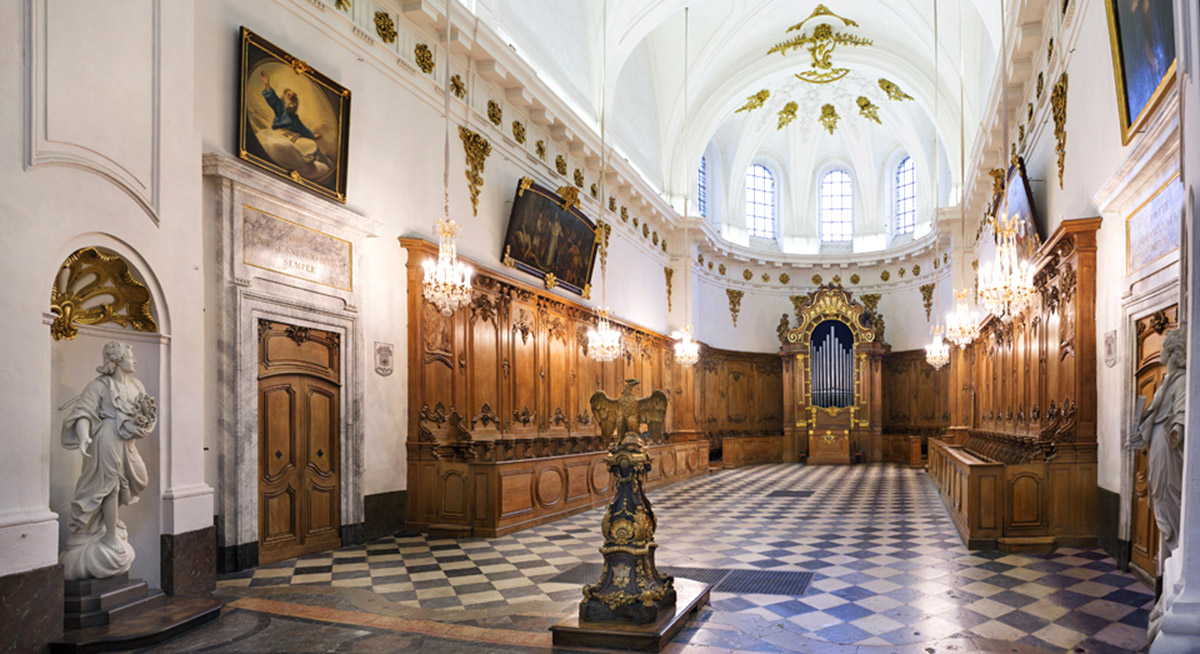 The morning light, only provided by five windows at the back, gives a unique impression of meditation mingled with transcendence.

Built in the 17th century, the choir is the oldest part of the church and was reserved for the monks. It was integrated in the present building by Ferdinand Delamonce (1733 – 1736) who in the process created a remarkable unity for the entire structure (through the use of vaults, cornices) and was able to overcome the difference in elevation between the choir and the nave by installing the Munet arch, an architectural feat.
The stalls and woodwork carved in massive wood of rocaille style, are due to Marc II Chabry and François Vanderheyde. The imposing frame, which has housed the organ case since the 19th century, was originally intended for the painting “The Baptism of Christ”, presently located in the chapel of the baptismal font .
You will find everywhere in the decor the fleur-de lis and the doves which are the two symbols of the Charterhouse, at the origin called “Charterhouse of the Lys (Lilly) Holy Spirit”.

The paintings above the stalls were placed in their current locations in the 19th century and were previously found in other buildings of the Charterhouse. 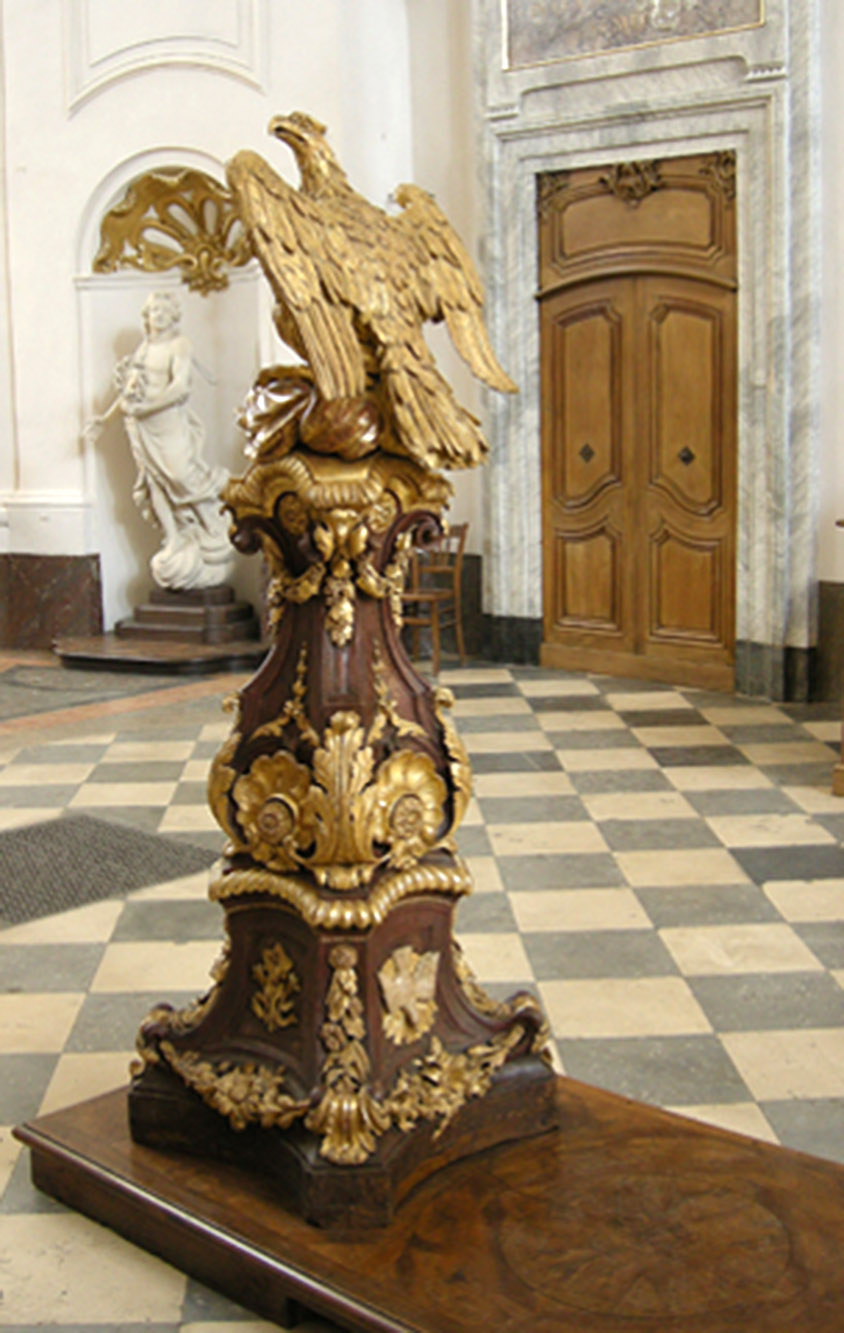 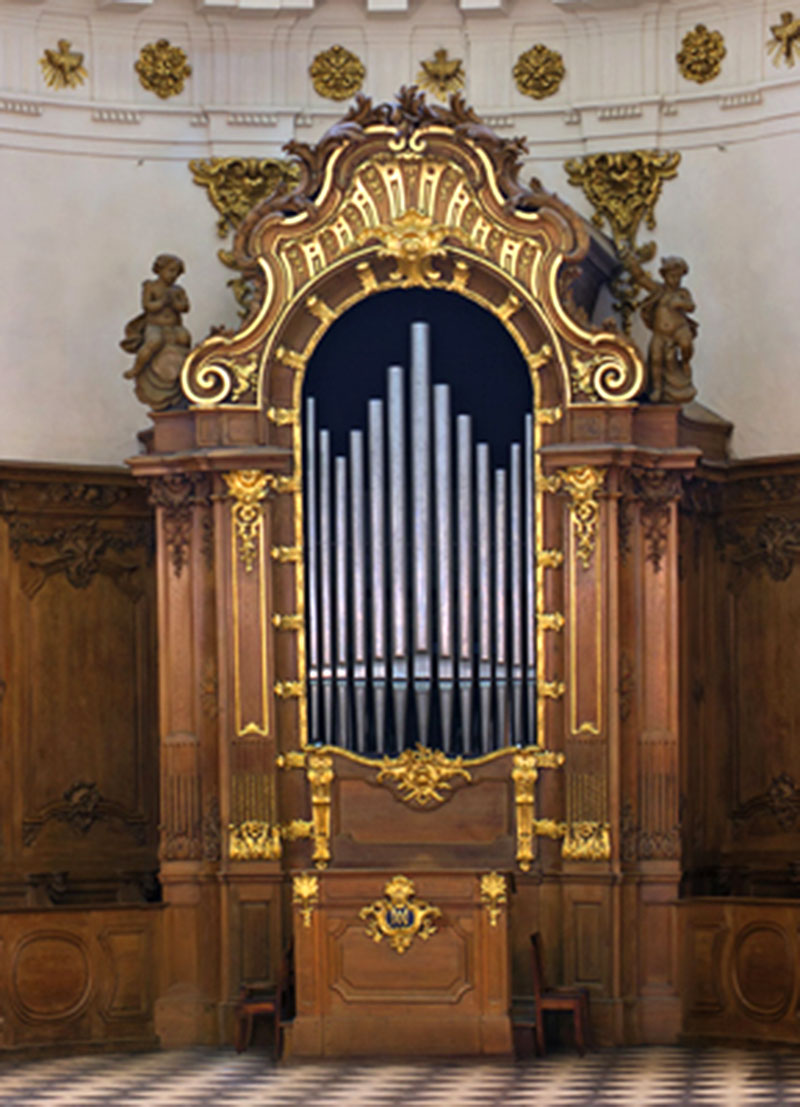 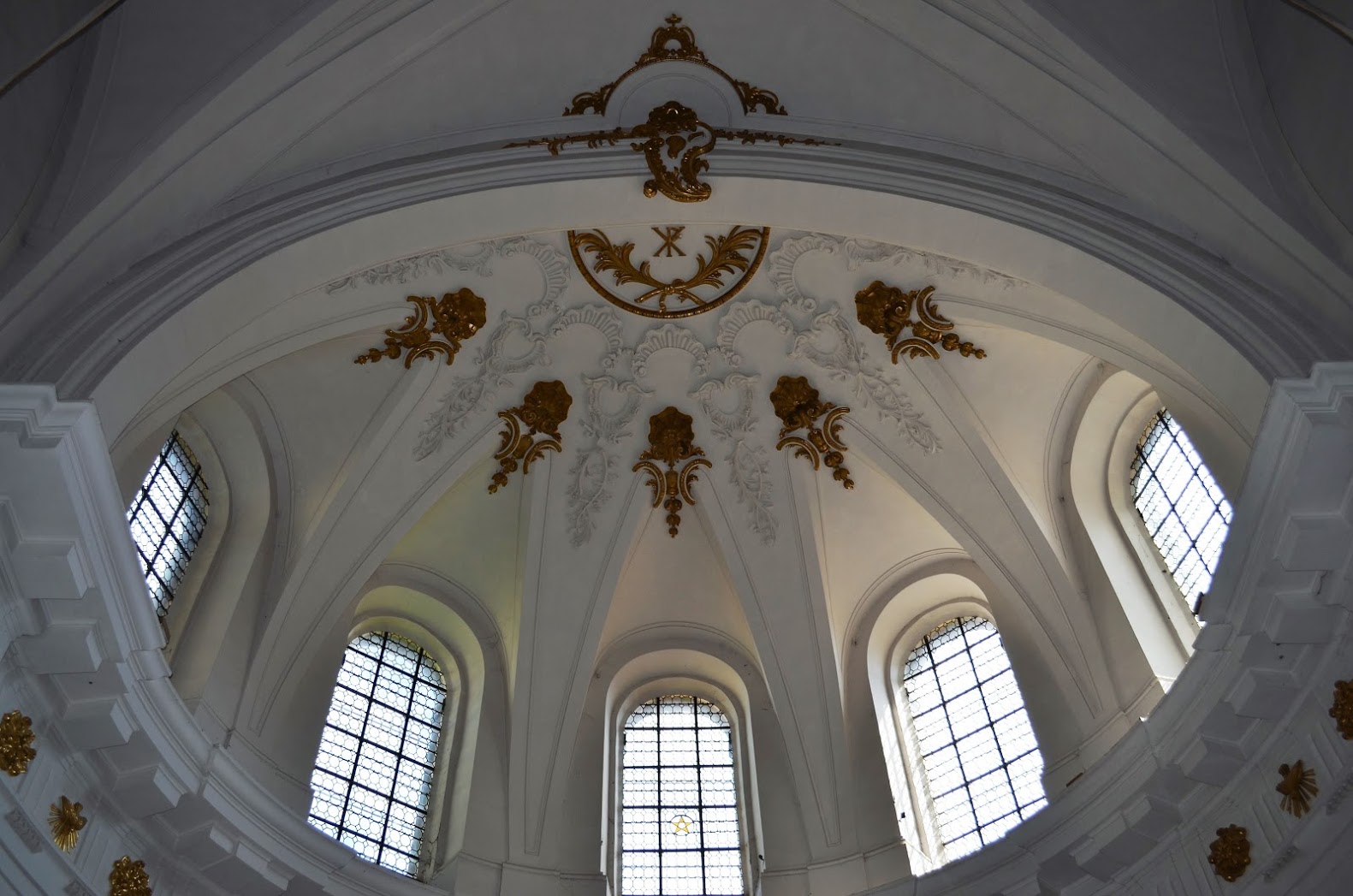 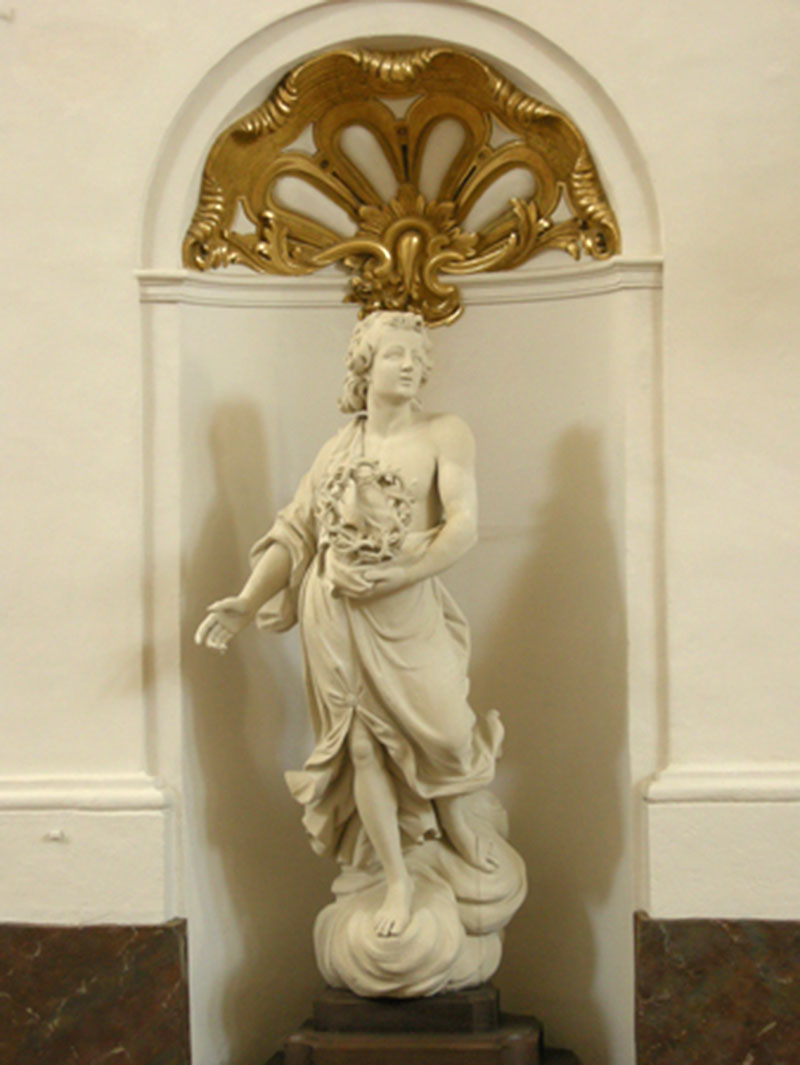 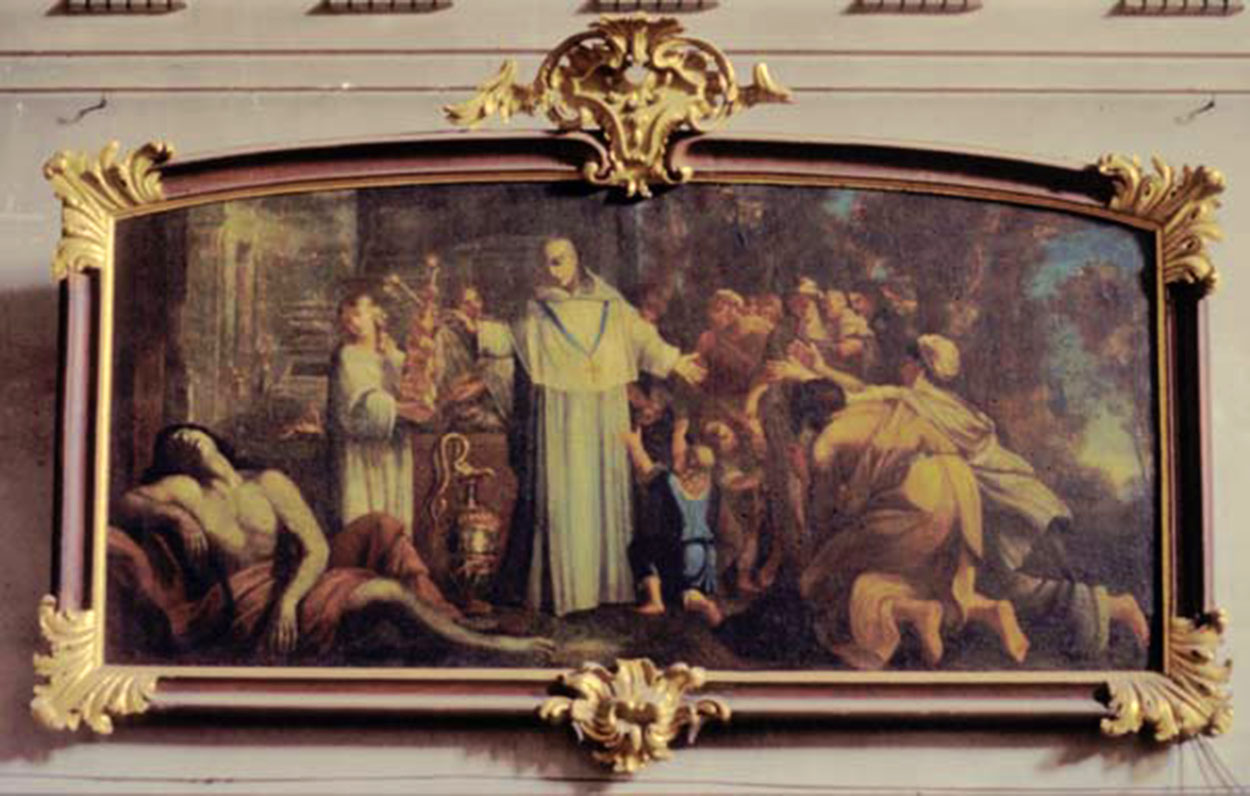 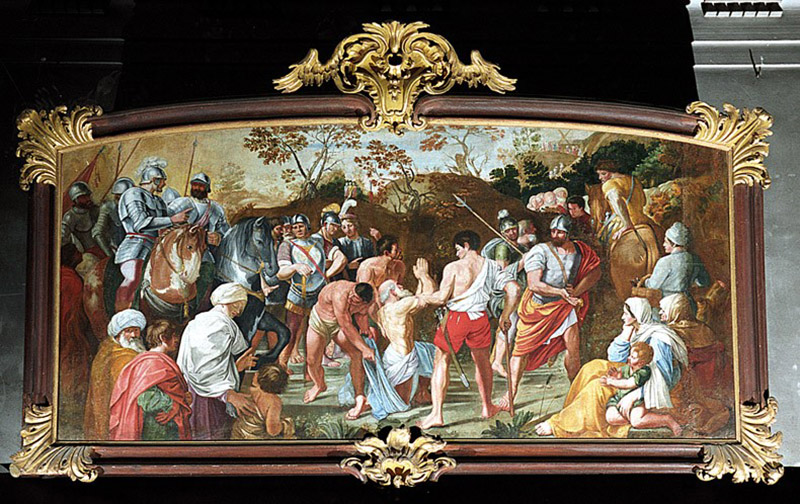 The lectern is a desk on which were placed the books which were used for singing during religious services.
It is a monumental piece of carved wood, dating from the end of the 17th century.

It summarizes in an original way the theme of the Holy Trinity, with three parts representing the Father, the Son and the Holy Spirit. The eagle with widely spread wings symbolizes the Word coming from God, the Father, sovereign and almighty. The middle part, embellished with foliage scrolls, highlights vine branches and bunches of grapes, an allusion to the blood of Christ.
On the base, doves recall the Holy Spirit, whose name was given to the Charterhouse.

Stalls and woodworks of the choir

The stalls were carved from 1745 to 1749 in the rocaille style by François Vanderheyde and Marc II Chabry and it is not always easy to distinguish the hands of the two artists.

The stalls and woodworks of the back of the choir are carved in massive wood in relatively straight lines. The armrests are in the form of an inverted volute, decorated with deeply sculpted foliage scrolls. Marc II Chabry designed these sections as well as the bas-reliefs which decorated the top of the doors and which were destroyed during the French Revolution.

Powerful motifs, characteristic of rocaille art, asymmetrical shells and garlands of flowers catch the eye at the top and at the bottom of the panels by François Vanderheyde. They create a line of flight that balances the alternating presence between each panel of doves (still preserved) and fleur-de-lis which disappeared during the Revolution.

A cornice in the form of a half circle adorned with short scrolls, fleurs-de-lis and angel heads crowns this magnificent work of wood sculpture.

The Organ at the back of the Choir

The organ was built in 1890, erected by the house Merklin and Kuhn in 1944 and restored in 1971 by the Manufacture Dunand. It is presently the best “two keyboards” in Lyon.

In 1996, this instrument was dismantled during the restoration of the church. It was then reassembled and restored by organ builder Pierre Saby and inaugurated on Sunday October 5, 2008. An electronic combiner can record 2000 combinations of stamps from 1900 pipes.

This organ was conceived to play all the repertories.


Note the framing of the organ case, the work of François Vanderheyde and Marc II Chabry : scrolls, shells, golden staples dot a dark woodwork, the pilasters of which are notched, and surmounted by “putti” (cherubs).

Apse of the Choir

The celling of the apse is decorated with fleurs-de-lis and the windows of the choir are supported by the cornice. 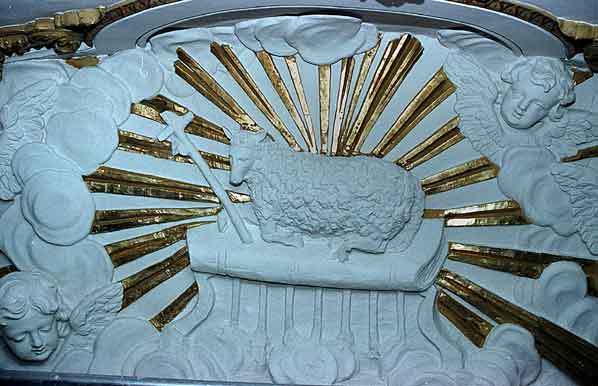 Seen from the choir, Munet’s arch is decorated with a bas relief in stucco representing the Paschal lamb.
The lamb, which is about to be immolated on the altar of the sacrifice, is lying on The Book and holds a cross between its legs. Rays of gold, clouds and cherubs frame the bas relief.

Angels of the Choir

On the sides of the choir, in the lower niches of the pillar walls of Munet’s arch, two large stuccoed wooden angels stand. They date from the time of Delamonce; one, on  the left, presents the New Testament, and the other on the right holds the crown of thorns.

Paintings of the Choir

Painting by François Perrier around 1625-1629:  in the center, the saint, chief prior of the Order, clad with the white dress of the Carthusian monks, resuscitates a dead man; on the right, the prostrate figures of the assistants. The painter had executed important works for the Charterhouse of Lyon, including a life of Saint Bruno painted on the walls of the small cloister. 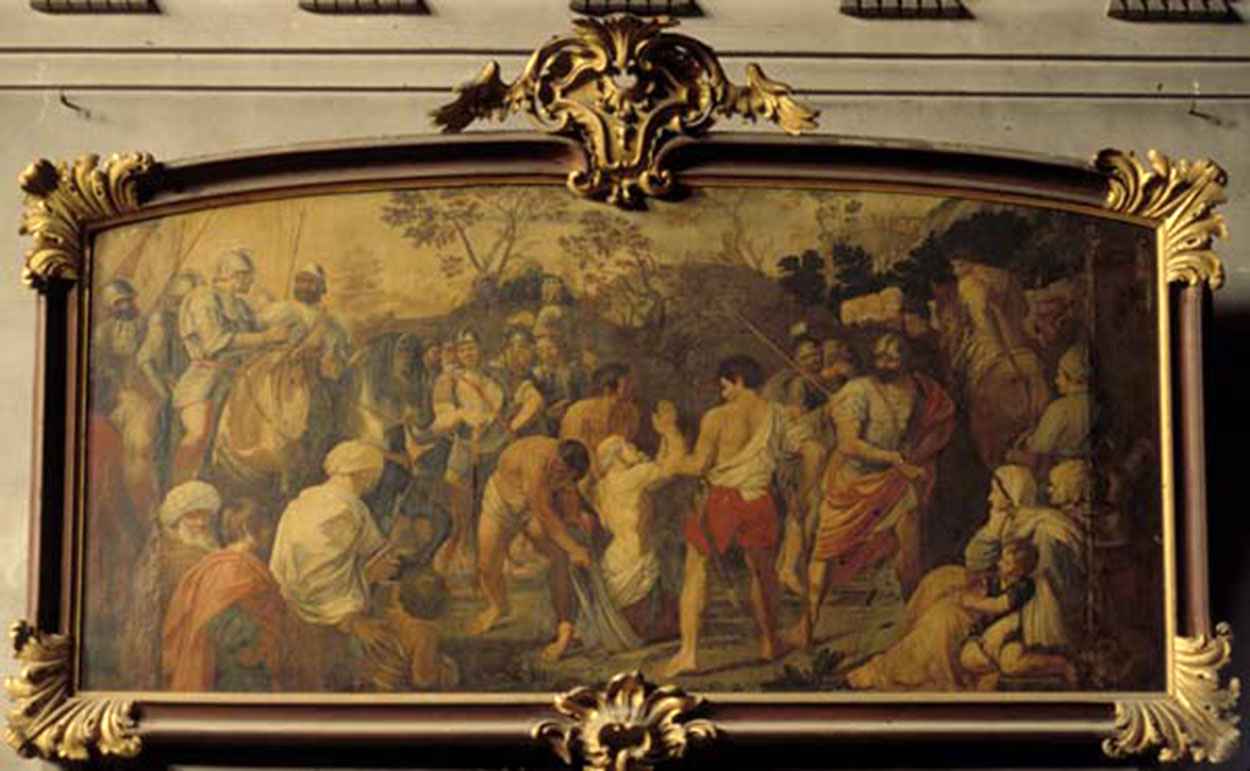 Paintings of the Choir

Painting “Saint Andrew  being led to his agony”

This painting by Henri Fortier, executed between 1640 and 1647, is a copy on a very small scale of the vast fresco painted by Guido Reni on the walls of a Roman church: the Saint, in the center, kneels and looks at the cross of his torment, visible at the top right.

« The Virgin and Child with Saint Anne », French anonymous, 1st half of the 17th century
The Virgin holds the apple of Redemption, an unusual representation.

« The Eternal Father », excellent copy by Jean JOUVENET, late 17th century
So well made that the painting has long been attributed to Noël HALLE who worked for the Charterhouse (his “Baptism of Christ”, classified, is today in the chapel of the baptismal font).