History of Saint Bruno's Church and the Charterhouse in Lyon

The Charterhouse in Lyon was built in the 17th and 18th centuries on the west slopes of the Croix-Rousse. Its property spread from the fortifications (replaced today by the "Boulevard de la Croix-Rousse") down to the river Saône. Today’s remains of the Charterhouse include Saint-Bruno’s church, a small cloister, the monks’ cemetery, the chapterhouse meeting room (today Saint Claudine’s chapel), a few privately-owned monk cells, a travelers’ house for Charterhouse visitors, the monks’ dining room, the Prior’s cell located today within the private school called “Institution des Chartreux”.

The Carthusian chapter, decision-making body of the  Carthusian monks, meets in Chambéry and decides to establish a charterhouse  in Lyon.

The Carthusian monks purchase "The Giroflée" estate on which the monastery will be built.

Laying of the foundation stone of the church, based on the plans of architect Jean Magnan.

Construction of the choir.

Elevation of the walls of the nave and construction of the dome are undertaken during this period; delays occur through lack of funding and all work
is interrupted  during 15 years, from 1631 to 1646.

Completion and enlargement of the church under the direction of F. Delamonce, succeeded by Soufflot . The Carthusian monks must seek several loans for the funding.

The Charterhouse is sold  as part of national properties. Amongst 8 property lots,  the lot that includes the church doesn't find a purchaser.
The  Charterhouse is closed and  the 17 Carthusian monks who still lived there are expelled.

The parish "Saint-Bruno les Chartreux” (Saint Bruno - the Carthusians) is created and the church becomes a parish church.

The side chapels are redesigned, the furniture of the church is replaced (pulpit, organ, way of Cross) and the present neo-baroque facade
is built under the direction of Tony Desjardins and Sainte-Marie Perrin.

The entire church is designated as a "Historical Monument". 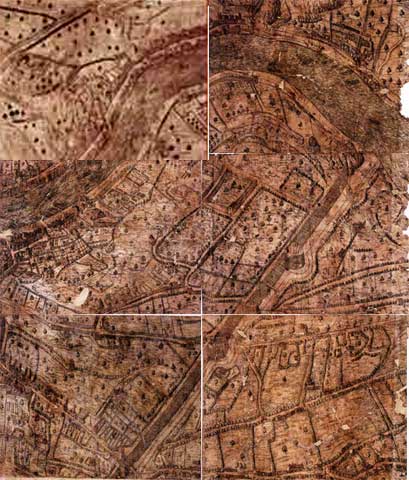 Location of the Charterhouse of Lyon

SCENOGRAPHIC PLAN OF LYON AND THE “LA GIROFLÉE” ESTATE

Near the Croix-Rousse fortifications (today the boulevard of the same name)  the “La Giroflée” estate was purchased in October 1584 by the Carthusian monks to establish the Charterhouse of Lyon under the name “Chartreuse du Lys Saint-Esprit” (“Charterhouse of the Lily and the Holy Spirit”). 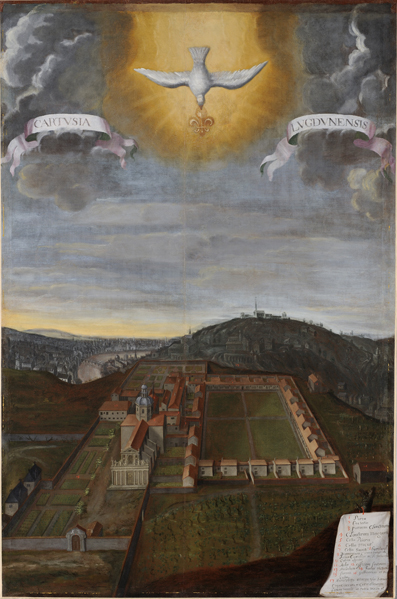 The Charterhouse of Lyon in the 18th century

Plan of the Charterhouse of Lyon in the 18th century
(painted around 1730, collection of the Museum of the Grande Chartreuse)

The second campaign of construction works, following the plans of Delamonce, were completed in 1750. The facade, different from that of the painting, would only be undertaken much later in 1870-1871 by Sainte-Marie Perrin, in the spirit of the 18th century.

Today all that remains of the charterhouse are the church, the little cloister, the chapterhouse meeting room, the monks’ dining room, and the travelers’ house.  A few monk cells are today privately-owned houses. 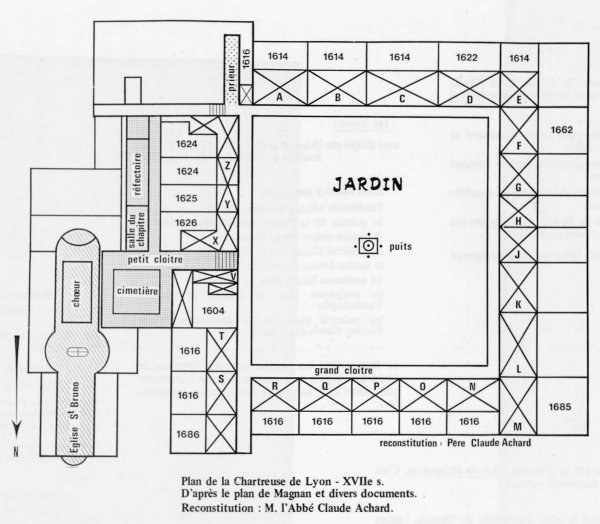 Plan of the Charterhouse in the 17th century

The charterhouses were, at the origin, situated in isolated places such as mountains or forests. Beginning in the 17th century, popes and princes established charterhouses in cities. But the principles of isolation, silence and contemplation were always respected in the choice of sites.

The general plan is approximately the same for all charterhouses :
- a large cloister around which are distributed the cells of the monks with a small garden,
- a little cloister which leads to the church, with the adjoining chapter house and dinning-room,
- the church,
- the Prior’s house,
- the house of the lay brothers.

The plans of the first church and of the original buildings were drawn by the architect Jean Magnan.

This is the plan of the second construction campaign of the church. The execution will be entirely faithful to this plan. Ferdinand Delamonce raises the level of the monks' choir, builds a large nave for the ordinary faithful, executes a wide transept surmounted by a high drum crowned with a dome which rises to 50 meters in height.
Note the shift in the height of the vaults between the choir and the nave, compensated by the Munet arch (name of the assistant architect of Delamonce) between the choir and the transept.

The little door at the end of the choir opens into the small cloister through which one could enter into the chapterhouse and the dining room.

Lyon, 2003, View of Croix-Rousse from the Fourvière hill.  At the top on the left the dome of Saint-Bruno and slightly to its right the travelers’ house with a large slate roof. Before the Revolution, the property of the Charterhouse of Lyon extended down to the Saône, at the centre of the photograph.
(photo Jean-Marc Berthier, laboratoire Gris souris Lyon)